Motorhead Molly takes the outside; Dyna Hurtcha looks for the jammer take out.

With injured players Mach Wheels and Marvel S. Maven looking on from the bench, the Chicks got off to a quick start against a nervous looking Dishes team that was playing in front of a sell-out crowd in its new home (the Arena St. Louis-like Activia Sportsplex). 2009 Rookie of the Year Kari-Mia Beere and veteran jammer Candy Crossbones (who scored an early grand slam) led the attack with much strong support from Fireweed, while Nasher the Smasher (whose absence was felt at the BOE) returned to add more power to an already deep pack.

Once settled, The Vicious Dishes soon began to display the improved patience and pack control that had led them to such success in the early part of the season, and a  double grand slam by Lippy Wrongstockings paced the Dishes as they took the lead and pulled ahead.  As has been the story in recent bouts, the Chicks Ahoy! once again found themselves in penalty trouble. In what may have been the turning point of the first half, following a well executed panty pass between the pivot Mega Bouche and an exhausted Fireweed, Bouche got called on an inadvertent cutting major and was sent off, giving the home team a power jam. Motorhead Molly also had some big jams for the Dishes who took nearly a 50 point into half time (77-28). Dyna Hurtcha was a physical, and effective  jammer in the second half for the Chicks, but the continued penalty problems never allowed them to stage any sort of comeback. The Chicks were obviously frustrated over some of the calls being made and let their displeasure be known; it was the penalty problems that kept them from gaining any sort of pack consistency or advantage.

In a year when derby is seeing the emergence of a more clearly defined management role on the track for the pivot, Jill Standing looks as comfortable as any at the position and she and the other Dishes pivots (including Meg N Plead) led the pack offensively through key power jams as well as they did defensively during pack  disadvantages. Greta Garbage looked good in the pack too and had a key jammer take out early in the first half. Barleigh Legal gave the Chicks’ jammers (particularly Candy Crossbones and G Force) a hard time all night, and whether it was blocking positionally or delivering big hits, she was often a dominant presence on jams.

Speedin Hawking holds the Tramps' jammer as the Dolls clear the inside line for Demolition Dawn.

The second bout of the night was a much closer and more exciting match up featuring two teams with nothing to lose, and both came out swinging. The Dolls entered the track with a swagger that was missing at this year’s BOE, and led by the return of Demoliton Dawn as a key jammer got out to an early led. She was also key defensively too, capable of reeling in the opposing jammer and forcing a call on those occasions when she didn’t take the lead. With an injury to star jammer Land Shark, rookies Slam Wow and Nut Meg took a lot of jams with the star on and looked comfortable  even against the more experienced Tramps’ jammers (including Kitty Krasher, Konky and Cell Block Bettie). Betty Bomber continued her rise as a triple-threat contender and  had some key jams to help the Dolls pull out to a 55-35 point lead at the half. 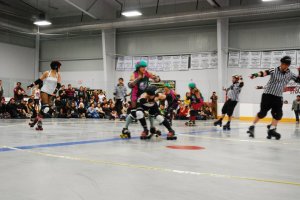 One of Audrey Hellborn's many big hits on the night.

The Tramps came out determined in the second half and slowly chipped away at the lead. Leigh-zzie Borden did double duty in the pack and jamming, and as a whole, the Tramps came together to take advantage of a penalty troubles by the Dolls, even pulling ahead by as much as ten points at one point. The Dolls managed to stay within reach and took a key timeout after a long string of penalties threatened to frustrate the team. Second year stand out Panty Hoser continued her strong play at pivot in the second half, while Monichrome also looked comfortable on the track considering she was playing in her first regulation bout in almost a year. Betty Bomber put in some determined jams including a key power jam with the Tramps clinging to a slim lead and only eight minutes remaining.  But it was the physical play–led by Audrey Hellborn, Seka Destroy and Jubilee–that would be the difference in the end. A string of huge jammer takeouts by a determined Audrey Hellborn late in the bout was key in fending off a final charge by the home team. The Dolls were able to pull away in the final few jams to claim their first victory since the 2009 BOE. (Keep an eye out for the video footage from layer9)

A BUSY DERBY NIGHT IN CANADA

It was a busy night for Eastern Canadian roller derby as five leagues had teams involved in bouts, none more important than the second half of the double header in the Montreal. The 9th ranked New Skids on the Block continued their seemingly inevitable march up the standings in WFTDA‘s Eastern Region, posting their second consecutive lopsided victory (186-65) over a team ranked ahead of them in the standings. The 8th ranked Dutchland All Stars provided a scrappy challenge for the Skids and their physical play and fast packs managed to frustrate Montreal’s potentially stifling pack management, and kept them to within 30 at the half. The win was the Skid’s ninth in a row. The evening in Montreal began with a frighteningly efficient 213-59 victory by the Sexpos over the Dutchland Blitz. Just when you thought there was only one dominant travel team in Montreal to worry about… (Watch the archived boutcasts on Montreal’s ustream channel.)

Forest City’s Thames Fatales also scored a lop-sided victory over an American opponent with an impressive 169-35 road win over Toledo’s Glass City Roller Girls. Hammer City kicked off its 2010 season with the Hamilton Harlots redeeming a first round elimination at a this year’s BOE with a  158-106 victory over BOE quarter finalists the Death Row Dames.

In an attempt to keep track of all the Canadian roller derby results this year, I’ve created a results page. It isn’t fully complete and I would appreciate any additions, corrections, etc.